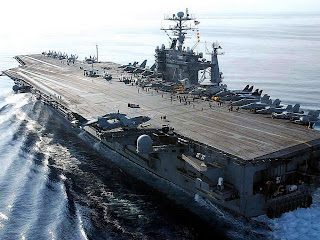 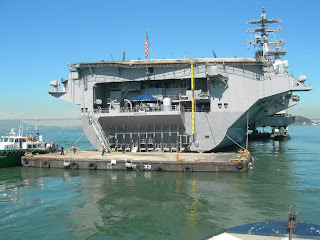 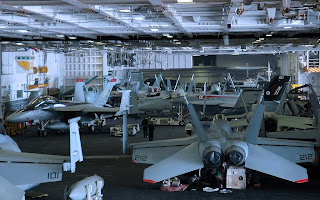 Supercarriers are the largest warships in the world, the USS George H.W. Bush cvn77, The last Nimitz Class Nuclear Powered Aircraft carriers,a steel-gray vessel bigger than three football fields and built at a cost of $6.2 billion,towers 20 stories above the waterline, displaces approximately 95,000 tons of water, has a flight deck width of 252 feet, and at 1,092 feet long, is nearly as long as the Empire State Building is tall. This floating airfield has a flight deck that covers 4.5 acres and carries more than 5,500 sailors and over 80 combat aircraft, Typical Nimitz-class ship Expected to operate as Navy warship for about 50 years
Such a massive ship would need an incredible amount of fuel if it were using normal engines. Instead, U.S. aircraft carriers use nuclear reactors.a carrier can sail for over 20 years before needing to refuel.providing virtually unlimited range and endurance, and a top speed in excess of 30 knots.
The reactors create steam, which drives a set of steam turbines. Each of the carrier's four massive propellers (21 feet in diameter) has its own turbine, and together, the turbines create something on the order of 280,000 horsepower. Steering accomplished by two rudders, each 29 feet by 22 feet and weighing 50 tons,The turbines also drive electric generators to provide all of the ship's power.
An aircraft carrier needs a lot of electricity. There is a huge air-conditioning system to keep people and equipment cool. There's a desalination plant that processes a half-million gallons of water a day. And there is a massive refrigeration system. There is enough food on board to feed 6,000 people for 70 days.

The whole point of all this technology is to create a floating airport.Nimitz Class Aircraft carriers have a massive hangar that can hold up to 100 airplanes. 110 feet wide and almost 700 feet long -- about 2 acres of covered space.All these airplanes take a lot of fuel. There's more than 3 million gallons of Aviation fuel on board an aircraft carrier.These totals are sufficient for 16 days of continuous flight operations before stocks have to be replenished.