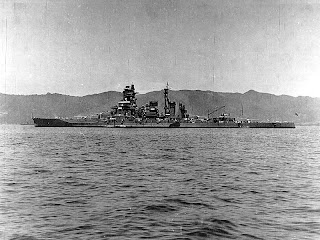 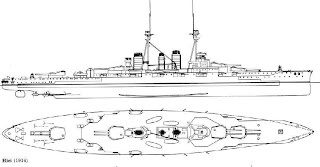 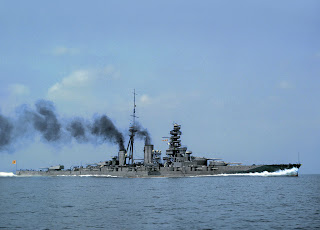 Imperial Japanese Navy IJN Hiei was a ww2 Kongō-class High Speed Battleship ,She was laid down by the Yokosuka Kaigun Kosho on 4 November 1911, launched on 21 November 1912 and completed on 4 August 1914. Until 1931 she was classified as battlecruiser.
When the fight over Guadalcanal began in August 1942, Hiei was sent south to operate with other units of the Combined Fleet. On 12 November 1942, Hiei was ordered toward Guadalcanal as flagship of a bombardment force that included her sister fast battleship Kirishima, a light cruiser and more than a dozen destroyers. Soon after midnight on Friday, 13 November, the Japanese were met by an American task force of five cruisers and eight destroyers. The resulting first night action of the Naval Battle of Guadalcanal was chaotic and bloody. she suffered thirty 203 mm (8 inch) shell hits from the cruisers USS San Francisco and USS Portland and many 127 mm (5 in) shell hits from anti-aircraft cruisers and destroyers. Her fire control systems for her main and secondary batteries were knocked out, her superstructure set afire and 188 of her crew killed.While retiring from the battle, her steering failed, leaving her unmaneuverable only a short distance from Guadalcanal's American-held airfield. Through the following day, Hiei's crew struggled to regain steering control, After daybreak she was attacked repeatedly by Marine Grumman Avenger TBF torpedo planes from Henderson Field, Avengers and Douglas Dauntless SBD dive-bombers from the USS EnterpriseTemplate:WP Ships USS instances, and B-17 Flying Fortress bombers of the United States Army Air Forces 11th Heavy Bombardment Group on Espiritu Santo. Hiei endured 70 attack sorties as she attempted to withdraw and was further damaged with bombs and torpedoes. However, she finally suffered a torpedo hit in the stern that destroyed all hope of escape. Soon after nightfall, her surviving crewmen were taken off and Hiei was left to sink some miles northward of Savo Island. She was the first of ten Japanese battleships lost to enemy action in World War II
specification
Displacement: 36,600 long tons
dimensions
Length: 222 m
Beam: 31 m
Draught: 9.7 m
Propulsion: Steam turbines, 4 shafts
Speed: 30 knots
Range: 10,000 nmi at 14 kn
Complement: 1,360
Armament: • 8 × 356 mm 14inch naval guns (4×2)
• 16 × 155 mm (6.1 inch guns (8×2)
• 8 × 127 mm (5 in) DP (8×1)
• up to 118 × 25 mm (0.98 in) AA