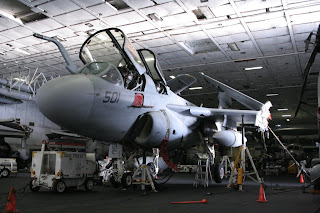 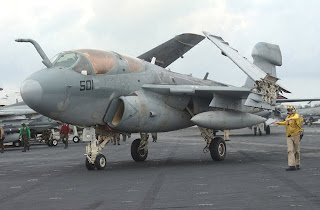 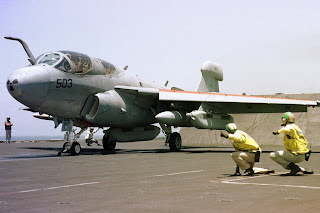 An EA-6B "Prowler," armed with an AGM-88 HARM missile, receives the signal to launch from the flight deck of the aircraft carrier USS John C. Stennis (CVN 74) 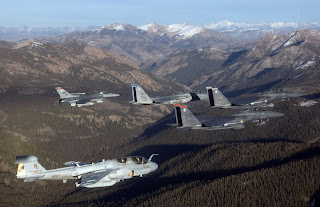 A five-ship formation consisting of two F-15E Strike Eagles, an F-15C Eagle, and an F-16 Fighting Falcon, all from Mountain Home Air Force Base, Idaho, and an EA-6B Prowler from the 388th Electronic Control Squadron, Naval Air Station Whidbey Island, Wash., flies over the Sawtooth Mountains in Idaho 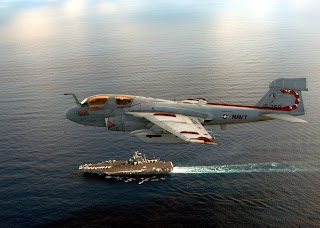 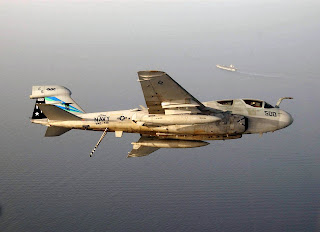 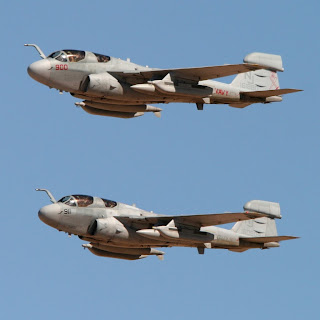 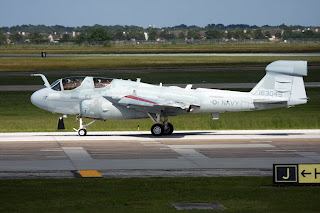 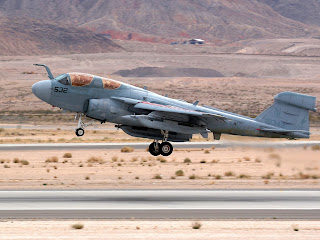 U.S. Navy EA-6B Prowlers
a twin-engine, mid-wing electronic warfare aircraft manufactured by Grumman (now Northrop Grumman) as a modification of the basic A-6 Intruder airframe.The EA-6A "Electric Intruder" was developed for the United States Marine Corps in the 1960s to replace the EF-10B Skyknight. It was a direct conversion of the standard two-seat A-6 Intruder airframe fitted with electronic warfare (EW) equipment. The EA-6A was used by three USMC squadrons during Vietnam War. A total of 27 were built with 15 of those being new builds. Most were retired in the 1970s with the last few retiring in the 1990s. The EA-6A was essentially an interim aircraft.The much more advanced and substantially redesigned EA-6B was developed beginning in 1966 as a replacement for EKA-3B Skywarriors for the United States Navy. The forward fuselage was lengthened for a larger four-seat cockpit and the antenna fairing added to the tip of the vertical stabilizer. The Prowler first flew on 25 May 1968 and entered service in July 1971. There prototype EA-6Bs were converted from A-6As and five EA-6Bs were development airframes. A total of 170 EA-6B production aircraft were built through 1991.The Prowler is powered by two non-afterburning jet engines and capable of high subsonic speeds. Since EW operations are very demanding, the Prowler is a high-maintenance aircraft and also undergoes more frequent equipment upgrades than any other aircraft in the Navy. Although designed as an electronic escort and command and control platform for strike missions, the EA-6B is also capable of attacking surface targets on its own, especially radar antennae, surface-to-air missile launchers, and other enemy defenses. In addition, the aircraft is highly capable of conducting electronic intelligence (ELINT) collection.