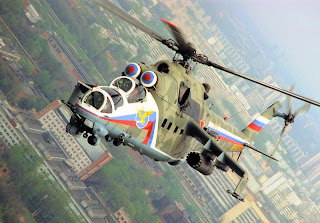 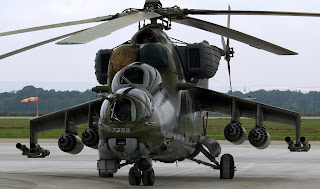 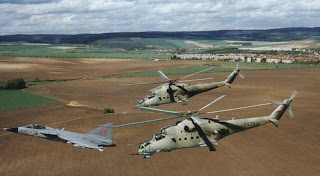 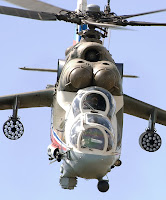 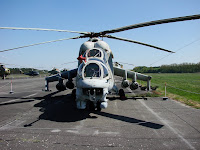 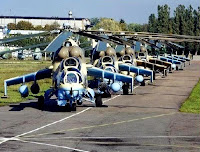 Mi 24 carries more firepower then any other attack helicopter and in different variety as well, rockets, AT missiles, cannons, bombs etc etc. Also it's much more heavily armored/protected then any other western "gunship" helicopter. Especially from the frontal aspect is virtually impervious to 12.7mm or .50BMG and all critical areas are protected against 23mm AP rounds including rotors and two front windshields. No other "gunship" has titanium and ceramic armor in such platform.Mi 24 will continue to serve in Russian armed forces well into the future even when there will be other attack choppers in service. The design team that developed Hind created a chopper that is nearly perfect and they couldn't even imagined back then that it would become such a successful platform.

The Russians used the mi 24 Hind extensively in their invasion of Afghanistan until the U.S. started providing Stinger anti-aircraft missiles to the Afghani resistance fighters.Hind was designed for speed..... sleek, retractable lading gear, large wings to provide 20% lift, more powerful engines etc.
It was designed to strafe targets like WW2 airplanes did. Speed is somewhat essential for this task so is heavy armor. Unlike Apache that is best suited to fly at night and shoot at the targets far away, It's a flying Armored Personel Carrier/Gunship,Mi 24 is the fastest combat helicopter in the world with the maximum speed of 335 km/h, for a comparison AH 64D maxes out at 276 km/h
its fast, maneuverable, fairly heavily armoured, and can put down very heavy firepower if needed. the cabin can carry 8 soldiers
The Super Hind is produced by Ate Aerospace a South African company. It has only been sold to Algeria so far. It has a South African Vekor 20mm gun and Mokopa anti-tank missiles.