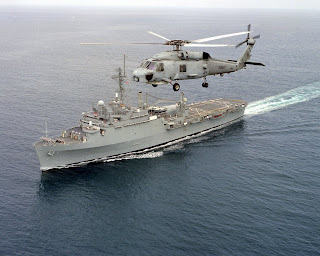 Pacific Ocean An SH-60 "Seahawk" assigned to Helicopter Anti-Submarine Squadron Light Four One (HSL-41), flies along side the amphibious transport dock ship USS Denver (LPD-9), during fleet operations in the Pacific. U.S. Navy Photo
LPDs as Multi-purpose Support Vessels The value of amphibious vessels has been highlighted in earlier conflicts and recently, in East Timor. To enable the deployment of expeditionary forces to areas of potential conflict there are various types of vessels that equip today’s amphibious forces but the requirements, especially those of the smaller nations come in different sizes and with different tasks. Besides peacekeeping operations, amphibious forces are also now involved in counter-insurgency campaigns or anti-terrorist special forces operations. Although they come in different sizes and with different tasks, amphibious vessels have a place even for the smaller naval forces. While there is no precise naval hull form classified as a “multi-purpose support vessel” for a high- capacity, multi-role amphibious/logistical support vessel, the term “multipurpose support vessel” is closer to the intent of its use given the necessarily limited objectives of small naval forces. The existing hull form most suitable for adaptation as multi-purpose support vessels for small naval forces is the LPD for which several designs are available and realised examples are operational today. The designs need only be slightly redefined according to the specific requirements of the user naval force. Examples of LPDs include the Enforcer LPD developed by Schelde Shipbuilding of the Netherlands. 
Another design is the 12,000- tonne Foudre-class LPD by French naval shipbuilder DCN which is adaptable as a multipurpose support vessel for small naval forces. At 7,665 tonnes full load displacement, Fincantieri’s San Giorgio-class LPDs are engines, yielding a top speed in excess of 50 knots (nearly 60 miles per hour) when fully loaded and can be outfitted with jet drives for shallow water operations and beaching. “The M-hull form creates a natural surface effect that not only enhances top-speed performance, but uses the bow wave energy to reduce the overall wake signature,” said Bill Burns, co-founder of M Ship Co, noting that the military is also interested in 40- and 120-foot vessels of similar design. “This makes the boat faster and more manoeuvrable because it remains flat, with almost no heeling, even during high-speed turns. The vessel’s proprietary design also gives it a low-radar profile.”

The M80 Stiletto is also notable because it is the largest US naval vessel built using carbon fibre composite and epoxy building techniques, which yields a very light, but strong hull. M Ship Co leveraged its network of collaborative partners and subcontractors to build the M80 Stiletto in less than one year. Azimuth Inc developed the vessel’s “electronic keel”—a maritime data bus for networked plug and play of emerging technologies such as communications, surveillance and weapons systems. SP Systems provided the carbon fiber technology for the composite hull. The vessel was built by National City-based Knight & Carver Yacht Centre. M Ship Co is in discussions with several major defence contractors to capitalise on the success of the M-hull technology for the emerging military market for vessels that can operate in alignment with the NECC’s new focus on “brown water” operations. smaller than the aforementioned Enforcers and Foudres. The 141-metre, 6,000-tonne STEM 1400 or Endurance-class LST is actually an LPD. It was developed by Singapore Technologies Marine (ST Marine) to replace Singapore’s five vintage ex-County-class LSTs. All these LPD types can be equipped with extensive communications equipment and organic docking facilities giving it a wider range of roles than the mere landing of and support for marine units and special forces teams. The latter support role is not new. Amphibious assault ships such as LSTs were even used as “mother ships” (not so much as command vessels but more like forward area base camps) during the Vietnam conflict to support counter- insurgency operations by the US forces along the length of the South Vietnamese littoral and far inland.