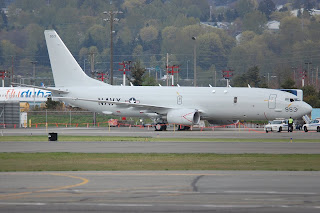 US Navy next long-range anti-submarine warfare, anti-surface maritime patrol and reconnaissance aircraft, the P-8A Poseidon, The P-8A is a derivative of boeing 737-800 and has the wings of a 737-900. The P-8A will carry the MK 54 Torpedo Anti-Submarine weapon