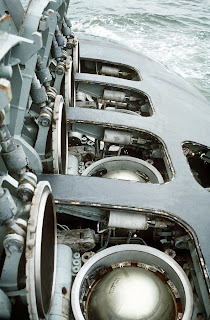 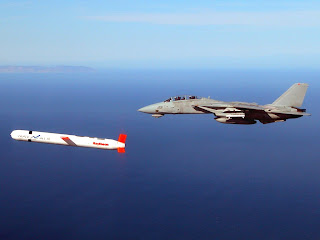 A Tactical "Tomahawk" Block IV cruise missile is escorted by a Navy F-14 "Tomcat" fighter during a controlled test, the missile successfully completed a vertical underwater launch,the next generation of Tomahawk cruise missile adds the capability to reprogram the missile while in-flight to strike any of 15 preprogrammed alternate targets or redirect the missile to any Global Positioning System (GPS) target coordinates. It also will be able to loiter over a target area for some hours, and with its on-board TV camera, will allow the war fighting commanders to assess battle damage of the target, and, if necessary redirect the missile to any other target. Launched from the Navy's forward-dep 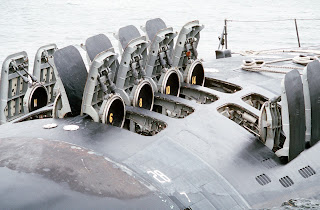 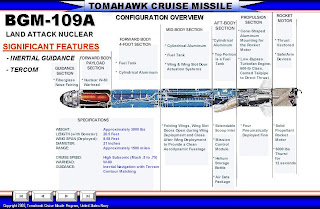 BGM-109 Tomahawk is the U.S. Navy's surface and submarine launched, precision strike long-range cruise missileThe land attack version of Tomahawk has inertial and terrain contour matching (TERCOM) guidance. TERCOM uses a stored map reference to compare with the actual terrain to determine the missile's position. If necessary, a course correction is then made to place the missile on course to the target.