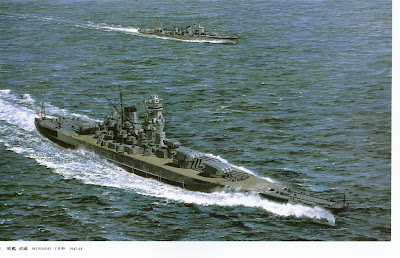 the world's largest battleships ever built is Japan's Yamato and her sister ship Musashi The class was designed to be superior to any ship that the United States or Great Britain were likely to produce,displacing 72,800 tonnes at full load, carried a main battery of nine 18-inch 460mm naval guns，The ship was powered by two shaft turbines of 75,000 hp (56,000 kW) and two shaft diesels of 60,000 hp (45,000 kW) Yamato actually saw little action during the war; her most notable achievement being a suicide run against the US invasion force off Okinawa in 1945. The final tragic demise of the Battleship Era

I remember the USS Washington's action,sunk the japanese battleship IJN Kirishima,and saving her stablemate,the South Dakota.Radar,gave us a powerful advantage.
the US Iowa class battleship were using newer more advanced steel armour, the King George V class had even thicker armour.
besides slight advantage for Yamato in day time action, the Iowa class had great advantage at night or any bad visibility due to its blind fire capacity... reason Washington smashed Kirishima was that Kirishima had no seeable target and kept shelling South Dakota or any cruiser it could see.

The Yamato is, quite simply, the biggest, best armored, and most powerful armed ship ever built. 69,988-tons full-load displacement mounting nine 460-mm/45 (18.1-inch) rifles in three triple turrets. it was about twice the size of other battleships; each of the three gun turrets weighed more than an American destroyer; the guns had a range of 40 kilometers (spotter planes were needed to target over the horizon); the Yamato was built around the guns; extra width allowed the ship to be fitted with the thickest armor
Her 18.1” main guns can smash through the armor of any opponent, The Yamato was the flagship of Admiral Isoroku Yamamoto, Commander of the Combined Fleet.

Her final mission was as part of Operation Ten-Go following the invasion of Okinawa on 1 April 1945. She was sent on a suicide misssion to attack the US fleet supporting the US troops landing on the west of the island. On April 6 at 16:00, Yamato, with Admiral Ito on board, the Light Cruiser Yahagi and eight destroyers departed Tokuyama to begin the mission. They were sighted by Two submarines, USS Threadfin and USS Hacklebackon 7 April as they exited the Inland Sea southwards
The U.S. Navy launched more than 400 planes from a dozen aircraft carriers took part in a coordinated attack; to intercept the taskforce
Attacking in three waves, The first wave of U.S. carrier aircraft engaged the Japanese ships starting at 12:30. The Japanese ships increased speed to 25 knots (46 km/h), began evasive maneuvers, and opened fire with their anti-aircraft guns. Battleship Yamato carried almost 150 anti-aircraft guns, including her massive 460 mm guns which could fire special "Common Type 3" anti-aircraft shells.


US dive bombers including F6F Hellcat fighters, SB2C Helldiver dive bombers and TBD Avenger torpedo bombers pummeled the battleship with bombs and rockets while torpedo bombers assaulted Yamato's port side.if the torpedoes mainly hit from that side, it would increase the likelihood of the target ship capsizing.

After sustaining 8 bomb and 10 torpedo hits,at about 14:20, her magazines detonated. She capsized to port and sank, still some 200 km from Okinawa. Around 2,475 of her crew were lost and 269 survived.