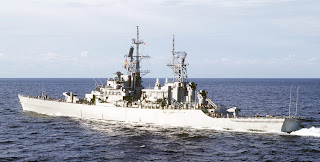 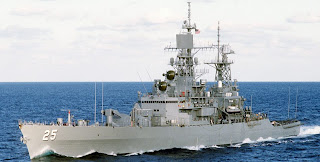 The USS BAINBRIDGE was commissioned on October 6, 1962, in Quincy, Mass. The ship was commissioned as the world's first nuclear powered frigate. The ship was equiped with state of the art electronics and communications suites. Bainbridge (DLGN-25) was virtually identical to the Leahy-class except for the replacement of her four 1200 psi boilers with two D2G reactors. The nuclear escort was equipped with larger Terrier missile magazines; twin 3-inch/50 gun mounts were specified instead of single mounts; and there were no reloads provided for the ASROC launcher