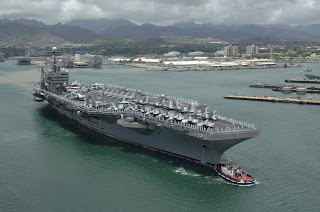 Pearl Harbor, Hawaii (July 5, 2006) - USS Abraham Lincoln (CVN 72)
CVN-72 Abraham Lincoln Class. These ships are considered a different class from the original CVN-68 group. They have different dimensions: the draft is 11.8 meters (38.7 ft), the displacement (light) is 73,973 tons, and the displacement (heavy) is 96,386 tons. The newer ships also have a different radar suite from the earlier ships. The internal arrangements are reported to be significantly different. 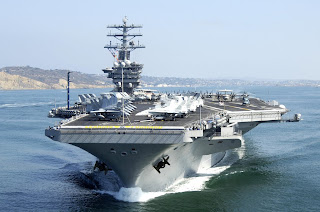 The CVN-68 Nimitz class nuclear-powered aircraft carriers are the world’s largest warships, with a full-load displacement of 91,700 tons and an overall length of 1,089 feet. The basic configuration of the class is similar to the CV-63 Kitty Hawk class, with two elevators before the island (superstructure), one aft of the island, and one on the port (left) side at the end of the angle deck. Each elevator is 25.91 by 15.85 meters (85 by 52 ft). The hanger deck is 208.5 meters (684 ft) long, 32.92 meters (108 ft) wide, and 8.01 meters (26.5 ft) high.
Each ship has two pressurized-water A4W/A1G nuclear reactors, compared to the eight pressurized-water A2W reactors installed on the U.S. Navy’s first nuclear carrier, USS Enterprise (CVN-65). This results in a much simpler layout of the engineering spaces, whereas the layout of the CVN-65 was an engineering and maintenance nightmare. For many years, the top speeds of the CVNs were classified information, leading to rumors that they were capable of unprecedented speeds that increased over the years to 40, 50, and eventually 60 knots. Such figures were never taken seriously, and when the real speeds were disclosed, they turned out to be much more prosaic. The latest carrier to run trials, the CVN-75 USS Harry S. Truman, topped out at 30.9 knots.

There are four Mark 13 Mod 1 steam catapults and four arresting wires. Each ship has enough aviation fuel and ordnance for 13 days of unreplenished air strike operations. 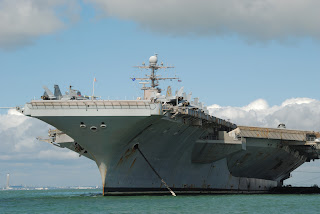 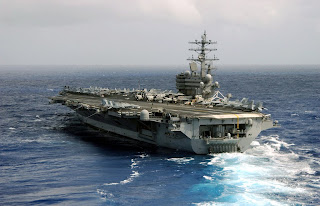 The primary functions of aircraft carriers include establishing localized maritime and air superiority, as well as strategic mobility while projecting power and technological prowess in a risk area. Consequently, carriers are equipped with the latest in air and sea control capabilities.
The airgroup on these carriers has been systematically reduced over the last decade and now stands at 12 F-14 Tomcat and 36 F/A-18 Hornet strike aircraft with four EA-6B EW aircraft, four E-2C AEWC aircraft, seven S-3A, and seven SH-60F ASW aircraft. The F-14s are progressively being withdrawn and replaced by the F/A-18E/F. This reduced airgroup, approximately 60 percent of the carrier’s strike aircraft capacity, is causing increasing concern. 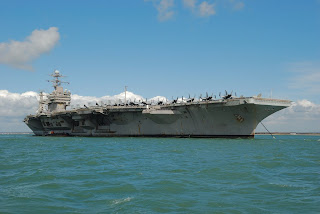 The USS Abraham Lincoln was commissioned November 11, 1989, four months after the USS George Washington was launched. The original plans called for the Washington to be commissioned in December 1991, but in February 1989, the Navy and Newport News agreed to postpone its commissioning until July 4, 1992. In theory, this gave the yard time to arrange an orderly transition of workers to CVN-74 and CVN-75; the reality was a simple desire to perpetuate tradition. When the Department of Defense released its revised FY90 budget request in April 1989, it announced that the carrier USS Coral Sea would be retired in 1990, about two years ahead of the previous schedule. This change was primarily caused by the ship’s material condition having deteriorated to the point where safe operational practice was no longer possible. Accordingly, the Coral Sea was decommissioned in June 1990. 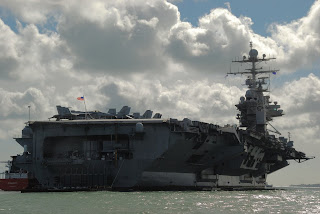 USS Ronald Reagan (CVN 76), June 21, 2004 - USS Ronald Reagan (CVN 76) sails through the Straits of Magellan on its way to the Pacific Ocean. The Navyís newest aircraft carrier
The CVN-68 class are an undoubted success, they are the backbone of the U.S. Navy, and a key element in America’s status as a world power. The fact remains though, that the basic design is a product of the 1960s and bears many of the hallmarks of that era. Much of the layout is a result of the class’s original concept as a nuclear-armed as well as a nuclear-power ship. Her magazines, large and centralized, reflect the need to provide adequate secure stowage for nuclear weapons while the system for taking weapons to the flight deck is poorly designed for the ship’s current role.
Another point that dates the basic Nimitz design is that the flight deck arrangements and arming/fuelling provisions are all designed to support surge operations. The operational concept was that the ship would run in from the far sea, launch a series of massive “alpha strikes” against the specified targets, then retreat out to sea again to rearm and refuel. Now, operations have switched to essentially conventional missions and the operational pattern is entirely different. The requirement is to launch a sustained cycle of missions with fewer aircraft in the air at any one time, a constant cycling of strikes through the day and night.
Already, as a part of the natural evolution of the design, there has been a major change in the CVN-68 class. The USS Ronald Reagan is a much more powerful vessel than her ancestor. In terms of fighting capability, she exploits the latest in technology and exhibits significant fundamental changes in structural design. She provides an interesting glimpse into the future evolution of aircraft carriers design. However, for all of that, the changes in her remain incremental rather than revolutionary. The new CVN-77 will take even more incremental steps towards a new carrier design, yet it will be the CVN-78 that will reflect a new design approach that suits the revised role of the U.S. Navy’s aircraft carriers. US Navy (USN) F-14D Tomcat fighter aircraft are staged in launch position for their departure from the USN Nimitz Class Aircraft Carrier USS THEODORE ROOSEVELT (CVN 71) to their homeport of Naval Air Station (AS) Oceana, Virginia (VA).
The construction of the Nimitz class carriers has now come to an end with the commissioning of the USS Ronald Reagan. Although CVN-77 George H.W. Bush is officially considered to be the 10th and last of the class, she is so modified that her similarities with the earlier ships are limited and the ship is really a one-ship class of her own.
Price Range. About $4.5 billion each. The price of the last of the series (CVN-77) was quoted as $5.2 billion in 1997.