Many of the MiG-21s did not have steerable nose gears, making them difficult to taxi; the sign of a novice Fishbed pilot was the zigzag track he made while moving on the ground.If a pilot put the throttle back on a MiG-21, it would take a long time to spool up again when trying to accelerate. Thus many of those who flew it stayed on afterburners as much as possible.
The MiG-21 was the soviet Union’s first truly modern, second generation jet fighter. Testing began in 1956, and the first version entered service in 1960 as the MiG-21F-13. Soviet designers developed a unique “tailed delta” configuration with a very thin delta wing, which gave the aircrft maneuverability, high speed, good medium-altitude performance, and adequate takeoff and landing characteristics. 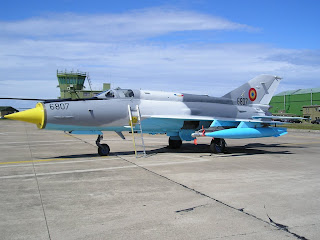 The MiG-21 could also turn abruptly; you didn’t want to fight one at low speed. Again, the answer was to use the more powerful engines of the US fighters to make it a vertical engagement. 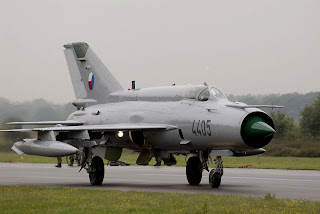 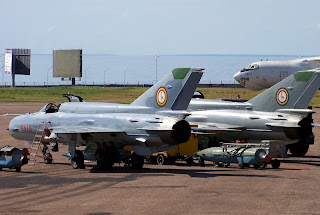 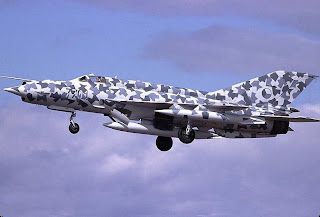 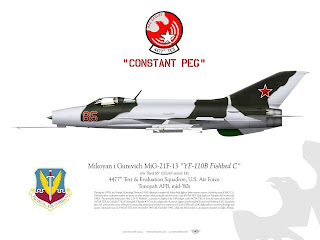 The Mikoyan-Gurevich MiG-21 is a supersonic jet fighter aircraft, designed and built by the Mikoyan-Gurevich Design Bureau in the Soviet Union. More than 30 countries of the world have flown the MiG-21, and it still serves many nations a half-century after its first flight. Its Mach 2 capability exceeds the top speed of many later modern fighter types. Estimates are that more than 10,000 MiG-21s were built, more than any other supersonic jet aircraft
UNITED STATES AIR FORCE

During the 1970s, the Foreign Technology Division USAF obtained a number of Soviet-built fighters from various sources, including several MiG-21s. Following their evaluation within the frame of other projects, they gradually entered service with 4477th TES "Red Eagles" at Tonopah AB, in the early 1980s. This formerly Indonesian MiG-21F-13 Fishbed C, was put on display in the VIP hangar of the 4477th TES. It wore the name of the then CO 4477th TES, Lt Col John T "Jack" Manclark ("Bandit #51") on its cockpit rails. A veteran Aggressor pilot with 900 sorties on Northrop F-5E, Manclark flew 301 sorties in the course of Project Constant Peg, the purpose of which was exposure of USAF, USN and USMC figher pilots to enemy technology and tactics. Manclark was CO 4477th TES from November 1985 till November 1987, while this MiG ended in an aviation museum in Eglin, Florida.