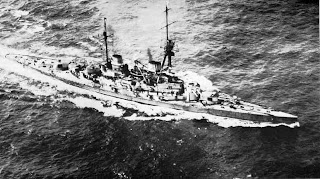 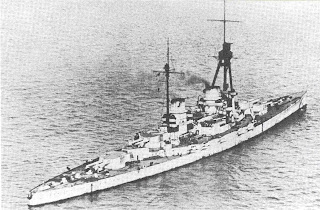 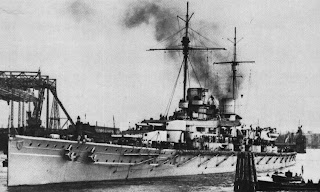 SMS Derfflinger was a World War I battlecruiser of the German Kaiserliche Marine.she fought at the Battle of Dogger Bank in 1915 where she was hit by three shells but in the process also managed to hit and cripple the british battlecruiser HMS Lion.

derfflinger battlecruiser is part of the German High Seas Fleet in the Battle of Jutland, the Derfflinger and her sister-ship the SMS Lützow were the ships that sinking the British battlecruisers HMS Queen Mary and HMS Invincible.HMS Invincible was blown in half by SMS Luetzow and Derfflinger when a shell hit the P and Q magazines. at the same time she is heavily damaged by hits from ten 15-inch, one 13.5-inch, and ten 12-inch heavy shells of the british warships,SMS Derfflinger was hit by HMS Queen Mary two shells,starting fire on the German ship. Succession of near misses, throwing water on the decks helped to extinguish the flames,One 15-inch shell from Revenge penetrated Derfflinger's "C" barbette, knocking it out of action.One 15-inch shell struck Derfflinger's "D" turret and detonated inside, killing most of the turret crew, rendering it useless. Derfflinger took 21 direct shell hits, intense fires, and over 3,350 tons of water. This was the highest number of hits suffered by any ship that survived Jutland; because of this, the British nicknamed her the "Iron Dog". She survived and was brought back to port for the rest of the war until being surrendered and sunk at Scapa Flow in 1919.