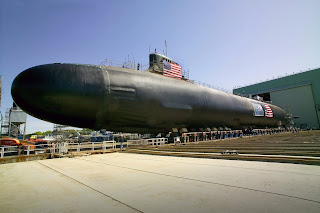 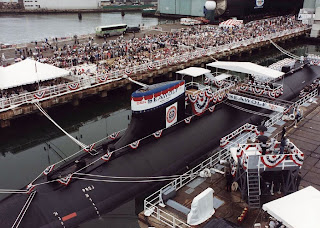 The last true submarine built for the "Cold War" with an expensive price tag. Her best features were applied to the new Virginia Class with a new mission to stay current with World events and to replace the aging fleet of Los Angeles class submarines 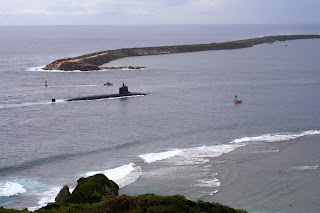 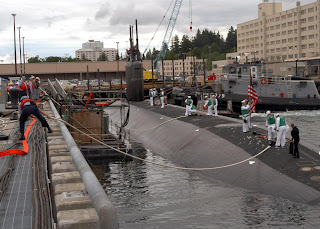 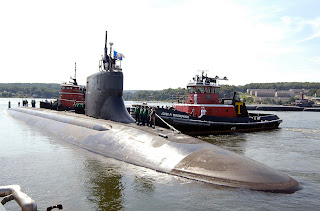 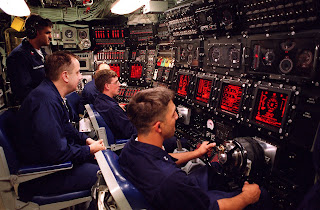 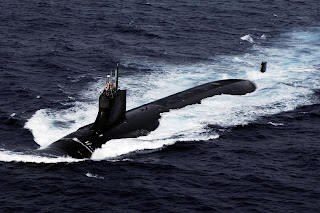 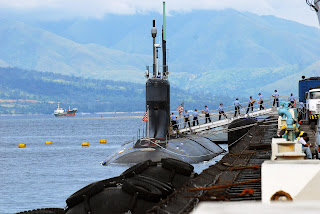 Seawolf-class fast-attack submarine USS Connecticut (SSN22) load supplies onto the boat.
The Seawolf class submarines have a top speed of 25 knots on the surface ,The maximum submerged speed is 35 knots, making the SEAWOLF class fastest submarine in the world

The us navy Seawolf class Nuclear-powered submarine (SSN) was the successor to the Los Angeles class,They were intended to combat the then-threat of large numbers of advanced Soviet ballistic-missile submarines in deep ocean, such as the Typhoon class, and to reply to the new Soviet Akula class attack submarines, they are the fastest, quietest, most heavily armed submarine in the world
Seawolf class are the most advanced and the most expensive submarines,The cost of twelve submarines of this class in 1991 was estimated at $33.6 billion. At one time, an intended fleet of 29 submarines was to be built over a ten-year period, But after the Cold War, construction was stopped at three boats.
The Seawolf class subs most important advantage of the design is its exceptional quietness even at high tactical speeds. Whereas most submarines need to keep their speed down to as little as 5 kts to avoid detection by passive sonar arrays, the Seawolf class are credited with being able to cruise at 20 kts and still be impossible to locate.a Seawolf at 25 kts makes less noise than a Los Angeles tied up alongside the pier!
specification

Power Plant One S6W reactor
one shaft at with 52,000 shp with pumpjet propulsor

The last of the Seawolfs. The modifications were pricey, 3.2 Billion total cost for the Jimmy Carter is quite a bit more than the Virginia class boats. The hull extension will allow for UUV deployments, SEALS, etc

SeaWolf is the most the powerful Attack Submarine in the world designed to Attack Massive Fleet of Soviet SSBNs.
I would love to watch the fight between the SeaWolf SSN and Typhoon SSBN protected by Severodvinsk Attack SSN.
All these weapons no more exist upto their potential.
I would like to make a comparison between the Russian nuc and the US nuc. since 90s, there a steep drop in acoustic noise generated by the new generations russian subs. i say this trend began by the sierra class which i personally take as a starter for a revolution in russian sub design. new sleek hull design, multiple rafting engines, multi layered non-acoustic hull tiles and probably a new active quietening measures (electronic noise cancelation). there's already a claim that the latest Akula 2 subs is quieter than the Improved Los Angeles class. only the seawolfs put american back at the edge. but there's a rumour that the new severodvinsk will outclass the seawolf

Sea Wolf was originally a 29 boat class to maintain a 100 boat sub-force. By 1989, LA class had 39 in service with another 23 contracted. The remaining 58 boats at that time included SSN-637 class (Sturgeons) so I'm going to partially credit sgstars for that one.
DoD indicated that due to cost, they would prefer a smaller force rather than maintain 100. DoD cut the contract to 12 boats in Jan 1991 (for a force of ~70+) <- credit to F_N for no. Jan 92, Pres Bush Snr wanted to stop at 1. Nov 6, 1992 saw funds provided for 3 sea wolfs. By 1995, future force structure was already targeted at 45-55. New SSN program initiated to replace LA class which eventually became the Virginia class.The Virginia class submarine was submarine was designed almost 10 years after the Seawolf and it was designed to be 200 million dollars cheaper than the Seawolf class. So, of course being built 10 years later is has some more advanced technologies in it, for example, highly advanced and simple to use computer systems, and a new periscope which uses some kind of optic fibre instead of the very bulky optical types used in earlier subs.

However, the Seawolf was designed in the cold war to counter the best Soviet threats and it of course, costed lots more and also according to 'Complete idiots guide to Submarines', the Seawolf is more quiet and more capable than the Virginia