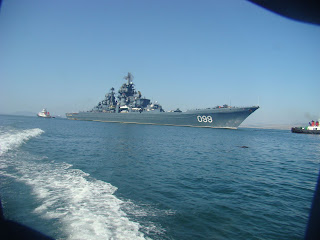 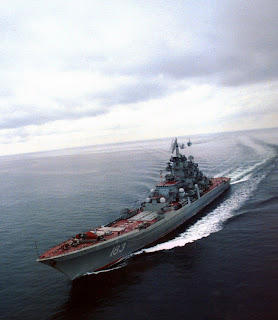 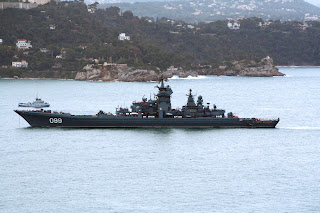 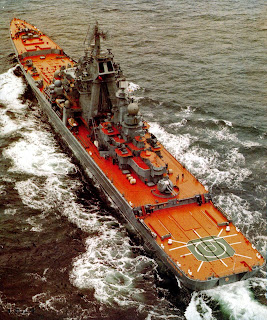 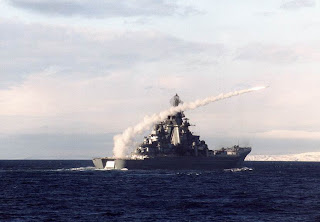 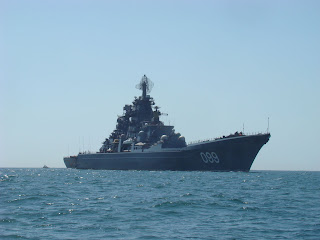 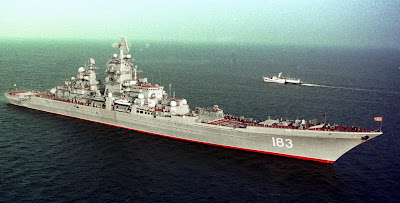 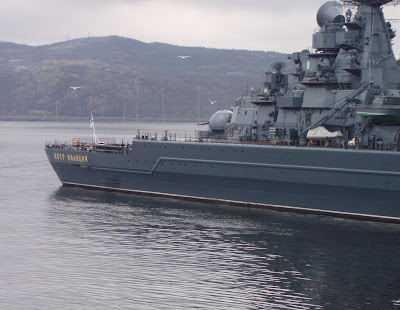 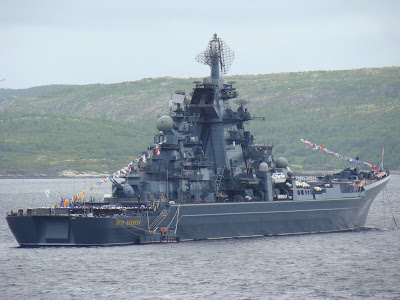 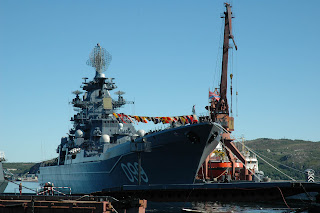 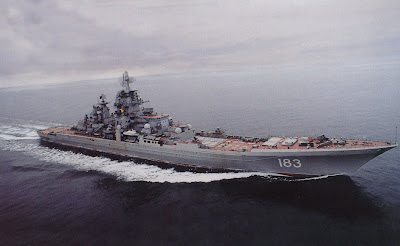 The Heavy Missile Cruise Ship, peter the great Project 1144.2 was is the fourth Kirov class nuclear powered battlecruiser of the Russian Navy, originally named Yuri Andropov. It is the flagship of the Northern Fleet.

The ship is armed with the Granit (Nato designation SS-N-19 Shipwreck) long-range anti-ship missile system.
and S-300F Air Defence Missile with twelve launchers and 96 vertical launch air defence missiles. The Kirov Class provides the capability to engage large surface ships and to defend the fleet against air and submarine attack.

No American surface combattant has much of a antisurface missile punch with the Harpoons. They were installed in 8 missile batteries. That's it. 8 Harpoons per ship. Now, Harpoon was/is a good weapon, but it has it's limitations. It's a subsonic missile, not at all stealthy, and it's warhead is medium sized. Against a target with a heavy antiair capability, even an 8 missile salvo ought not be lethal. It's debatable whether it had a prayer of getting through the defenses of an alerted Kirov, without some help. OTOH, as far as defense is concerned,


Tico was state-of-the-art. Russian surface to surface technology had one, big advantage, though; they had a couple of really formidable missiles. Supersonic, which meant reduced engagement envelopes, timewise. One of those missiles had a monster-warhead. A carrier killer. A warhead large enough to sink a 100k ton hull would pulverise a Tico. If it could get through.

The Kirov class cruisers were designed to attack and sink 1 us carrier with one hit (granit or uran missiles i forgot). Plus the russian built ASM missiles have a loger range and can be fitted with nuclear warhead. If such a missile can sink a 100,000 tons carrier, it will destroy a tico class us ship easy.The Peter the Great has the following: 64 AS-N-9 Gauntlet Missiles 94 SA-N-20 Gargoyle Missiles 192 SA-N-11 Grisom Missiles 20 SS-N-19 Shipwreck Missiles

The Kirov class are relics of the cold war. It's main purpose was to destroy aircraft carriers without the luxury of ground based air support. These are very large and sophisticated and therefore very expensive to maintain, especially as Soviet systems were numerous and redundant. The redeundancy was due to low confidence of their own weapons systems. It would be interesting to see what upgrades were made and if systems were reduced.

The propulsion plant on the Kirov class whilst well known as nuclear, also had fuel oil boilers which could propel the ship with the nuclear plant shut down.

Modern gas turbine and diesel propulsion plants are quite a bit easier to run and less expensive to maintian than steam (nuclear or fuel oil).

Fleet sizes and operatons tempo are reduced significantly worldwide so there isn't the same fuel usage for surface warships now-a-days as back in the 60's and 70's.

While the offensive capability of the Kirov class in today's world is still quite potent and quite impressive, present day budgets for operations and especially maintenence may be prohibitive for a Kirov class, even for a cash rich country like Russia.