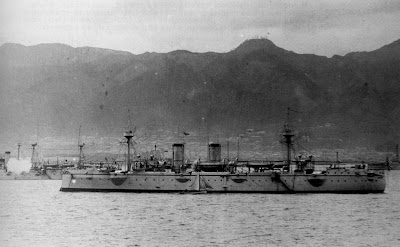 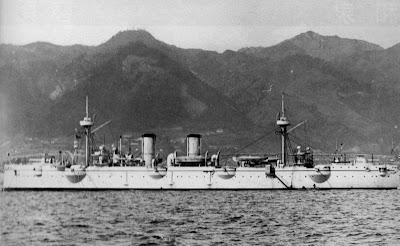 After the outbreak of the First Sino-Japanese War, Kamimura Hikonojo was assigned command of the new cruiser Akitsushima and won distinction at the Battle of the Yellow Sea on 17 September 1894.

During the Spanish-American War, the Akitsushima (which was then based at Makung in the Pescadores Islands, was sent to Manila in the Philippines to safeguard Japanese interests and citizens.

On 21 March 1898, the Akitsushima was re-designated as a 3rd class protected cruiser. It was called upon for escort duties for Japanese troops and supplies during the Boxer Rebellion.

Considered underpowered, poorly armored, and outgunned by the time of the Russo-Japanese War, the Akitsushima was largely assigned to rear line duties. It was based in the Tsushima islands, and patrolled the sea lanes between Tsushima and Port Arthur. It was in the Japanese 3rd Fleet during the Battle of Tsushima.