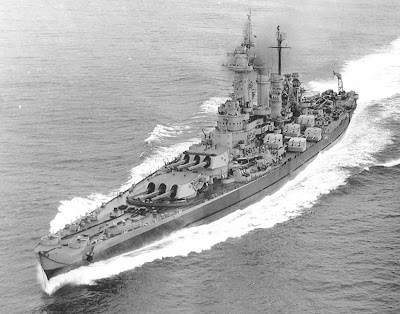 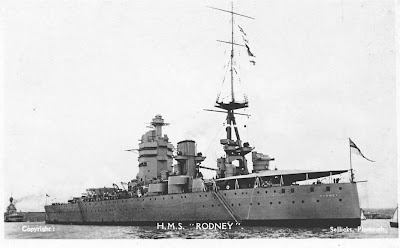 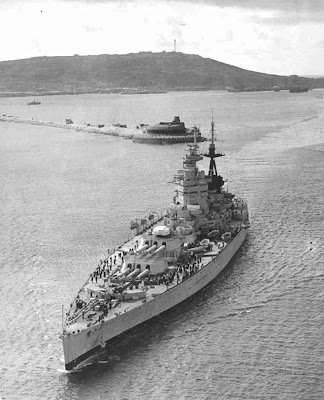 HMS Rodney (pennant number 29) was a Nelson-class battleship of the Royal Navy.
Built under the constraints of the Washington Naval Treaty of 1922, the design was limited to 35,000 tons and showed certain compromises. To accommodate 16 inch (406 mm) main guns in three turrets, all of the turrets were placed forward and the vessel's speed was reduced and maximum armour was limited to vital areas. Even with the design limitations forced on the designers by the treaty, the Rodney and Nelson were regarded as the most powerful battleships afloat until the new generation of all big gun ships was launched in 1936. she joined up with King George V; Admiral Sir John Tovey sent the destroyers home because they were low on fuel, and had Rodney fall in behind King George V for the battle against the Bismarck the next day. On the early morning of 27 May 1941, along with the battleship King George V and the cruisers Norfolk, and Dorsetshire, she engaged the Bismarck, which had had its rudder machinery damaged by a Swordfish-launched torpedo the day before. After Bismarck's guns were knocked out, Rodney closed with Bismarck until she was firing essentially a flat trajectory, and spotters could actually follow the shells to the target. One 16-inch (410 mm) shell was tracked from the gun to where it hit the face of Bismarck's #2 gunhouse (turret Bruno) and exploded, blowing out the back of the gunhouse.

I believe this is HMS Nelson leaving Portland Harbour 1947.