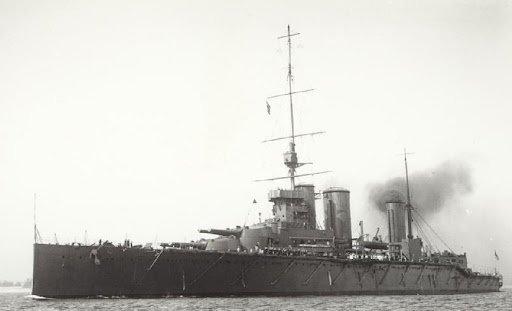 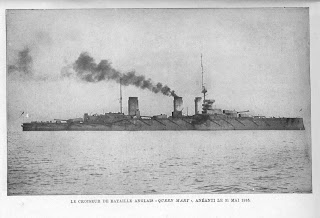 HMS Queen Mary was a battlecruiser of the British Royal Navy. similar to the Lion class.
Commissioned: September 1913
She was under the command of Captain Cecil I. Prowse at the Battle of Jutland on 31 May 1916. Due to her more modern rangefinders, her gunnery was more accurate than the rest of the Royal Navy battlecruisers, and she was firing full broadsides. She had fired about 150 13.5 in shells, putting one of Derfflinger's turrets out of commission, then she switched fire and focused 4 hits on the SMS Seydlitz. The mighty Seydlitz hit back, first striking Queen Mary above the right gun on 'Q' turret; this gun was out of action, but the left gun kept firing. Shortly after, more 30.5 cm (12 inch) shells hit her forward near 'A' and 'B' turrets, and another hit 'Q' turret. The forward magazine exploded, the ship listed to port, and more explosions followed as the ship was sinking. All but twenty-one of her 1,266 crew were lost.