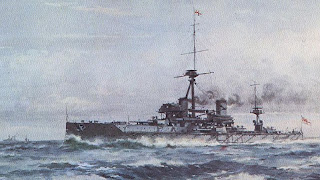 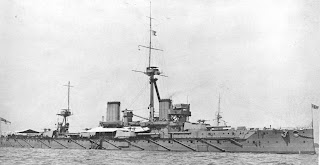 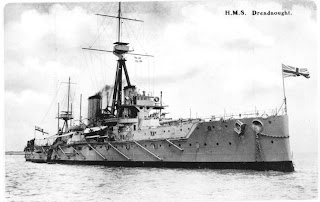 HMS Dreadnought of the Royal Navy was a battleship design by Admiral Sir John "Jackie" Fisher, who became First Sea Lord in 1904, Fisher had originally advocated a Royal Navy based around submarines and fast torpedo boats, and had subsequently tempered his revolutionary ideas with a vision of fast, all-big-gun battlecruisers, which would have the firepower and speed to engage battleships and cruisers, albeit with much less armour protection than the former. Fisher felt that speed was a better defence than armour. Although the battlecruiser concept would become popular in the run-up to World War I, Fisher was nonetheless forced by the Admiralty to create an all-big-gun battleship instead.Dreadnought was laid down and assembled with unparalleled speed in Portsmouth Royal Dockyard. She was laid down on 2 October 1905, and completed just 14 months later in December 1906. Dreadnought represented such a marked advance in naval technology that her name came to be associated with an entire generation of battleships, the "dreadnoughts", as well as the class of ships named after her, while the generation of ships she made obsolete became known as "pre-dreadnoughts".

Dreadnought was the first battleship of her era to have a uniform main battery, rather than having a few large guns complemented by a heavy secondary battery of somewhat smaller guns. She was also the first capital ship to be powered by steam turbines, making her the fastest battleship in the world at the time of her completion.