the line drawing of Scharnhorst 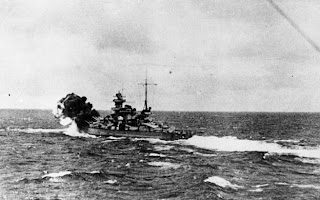 The most famous naval battle involving German battlecruisers Scharnhorst was the sinking the British aircraft carrier Glorious off Norway. This photograph shows Scharnhorst firing her forward 283mm guns during this very engagement.

The port forward 150mm turret of the sms Scharnhorst seen from ahead. Single-mounted 150mm guns are beyond, at main deck level, with 105mm twin anti-aircraft guns above.

Scharnhorst with her crew her crew manning the rail 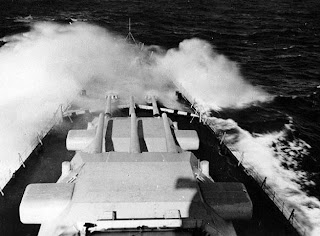 View from the forward superstructure towards the bow, with the ice cover accumulating on the 283mm gun turrets. Although the installation of "Atlantic bow" improved deck conditions in rough waters, in stormy seas the ship still took plenty of surf across the deck. 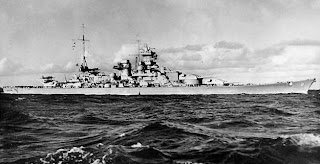 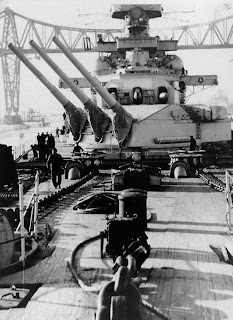 The wooden foredeck of Scharnhorst, with anchor handling gear in the foreground and two triple 283mm gun turrets behind. The silhouette of the bridge in the background indicates that this photo was taken at Kiel during the winter of 1939-40. 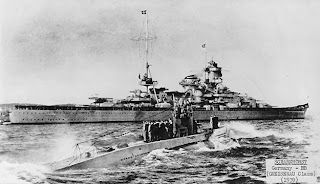 photo of Prien's U-47 arriving at Kiel on 23 October 1939, returning from the mission in which she sank the British battleship Royal Oak inside Scapa Flow on 14 October. The battlecruiser Scharnhorst is in the background. 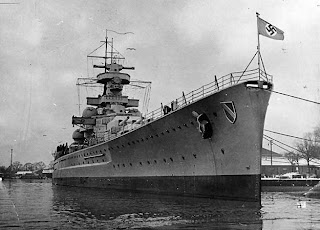 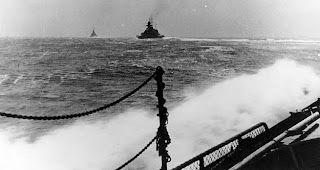 Operation "Cerberus", German fleet steaming up the English Channel, en route from Brest to Wilhelmshaven, 12 February 1942. Photographed from the heavy cruiser Prinz Eugen, the Gneisenau is next ahead, with Scharnhorst visible in the distance. 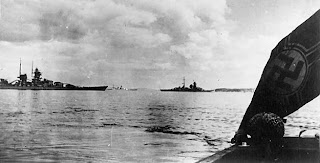 German warships in Norwegian port Trondheim, in June 1940. Battlecruiser Gneisenau is at left, with Scharnhorst in the left middle distance and heavy cruiser Admiral Hipper in right centre 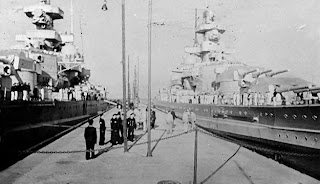 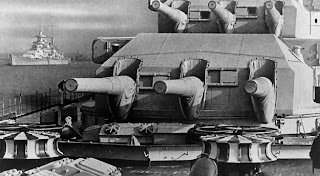 The wooden foredeck of Scharnhorst, with anchor handling gear in the foreground and two triple 283mm gun turrets behind. at Kiel during the winter of 1939-40.


Scharnhorst was a famous World War 2 capital ship, she was the battlecruiser of imperial german navy,also referred to as light battleship
Designed in mid-1930s and being the first German war ships to be built outside of the limitations of the Versailles treaty, she was designed for a formidable maximum speed and extended range to allow for commerce raiding.
Scharnhorst could make 32 knots, superior to most of the ships of the Royal Navy.
In a single action on Christmas day 1943, Scharnhorst was ordered to sea in appalling weather to attack the convoy JW 55B north of Norway. only to go straight into a trap orchestrated by the British. Scharnhorst, which early during the engagement lost its fire control radar, put up a heroic resistance against the convoy's escort force of the cruisers HMS Belfast, Norfolk, and Sheffield. Belfast had picked up Scharnhorst at 08:40 and 35,000 yards (32,000 m) using her Type 273 radar and by 09:41, Sheffield had made visual contact. Under cover of snow, the British cruisers opened fire. Belfast attempted to illuminate Scharnhorst with starshell, but was unsuccessful. Norfolk, however, opened fire using her radar to spot the fall of shot and scored two hits. One of these demolished Scharnhorst's main radar aerial, disabling the set and leaving her unable to return accurate fire in low visibility. Norfolk suffered minor damage.

In order to try to get around the cruisers to the convoy, Bey ordered Scharnhorst to take a southeast course away from the cruisers. In the late afternoon, the convoy's covering force, including the British battleship HMS Duke of York, made contact and opened fire. Despite suffering the loss of its hangar and a turret, Scharnhorst temporarily increased its distance from its pursuers. The Duke of York caught up again and fired again - the second salvo wrecked the "A" turret, detonating the charges in "A" magazine which led to the same in "B" magazine. Partial flooding of the magazines quenched the explosions. No Royal Navy ship received any serious damage, though the flagship was frequently straddled, and one of her masts was smashed by an 11-inch (280 mm) shell. At 18:00 Scharnhorst's main battery went silent; at 18:20 another round from Duke of York destroyed a boiler room, reducing Scharnhorst's speed to about 22 knots (41 km/h) and leaving her open to attacks from the destroyers. Duke of York fired her 77th salvo at 19:28

Battered and crippled as she was, her secondary armament was still firing wildly as the cruiser HMS Jamaica and the destroyers Musketeer, Matchless, Opportune, and Virago closed and launched torpedoes at 19:32,The last three torpedoes, fired by Jamaica at 19:37 from under two miles (3 km) range, were the final crippling blow.

A total of 55 torpedoes and 2,195 shells had been fired at Scharnhorst.

Scharnhorst sank at 19:45 hours on 26 December 1943 with her propellers still turning. Of a total complement of 1,968 men, only 36 survivors - none an officer - were rescued
Later that evening, Admiral Bruce Fraser briefed his officers on board Duke of York: "Gentlemen, the battle against Scharnhorst has ended in victory for us. I hope that if any of you are ever called upon to lead a ship into action against an opponent many times superior, you will command your ship as gallantly as Scharnhorst was commanded today".