MH-65C,it will be called the Multi-Mission Cutter Helicopter. 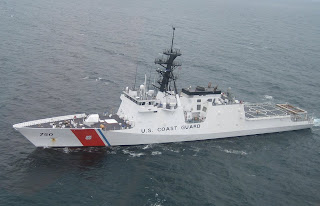 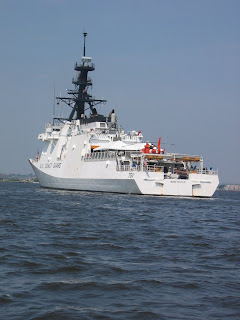 Bertholf, the Coast Guard's first 418-foot National Security Cutter homeported SAN FRANCISCO
The first National Security Cutter, Bertholf (WMSL 750), returned Monday after four days of trials in the Gulf of Mexico. During the trials, extensive testing of propulsion, electrical, damage control, and combat systems were conducted. This culminated in the successful completion of a four-hour full power trial, standardization trials, as well as 57 mm gun and close-in weapon systems (CIWS) testing."When you combine this extremely capable cutter with our high performing crew, you have a recipe for legendary achievement," said Captain Kelly Hatfield, prospective executive officer, Bertholf. "We are building the legend one step at a time. The latest step was taken during builders trials with the successful first ever firing of the 57mm gun from a U.S. ship."Bertholf is the first of eight planned ships in the new class of advanced multi-mission cutters being acquired under the Deepwater Program. Northrop Grumman Shipbuilding is building the NSCs, while Lockheed Martin is building and integrating the command, control, communications, computers, intelligence, surveillance, and reconnaissance (C4ISR) capabilities onboard the cutters.Over the trial, the C4ISR systems tested the surface and air tracking radars as well as the communications and navigational systems." Among those onboard the NSC during builder's trials were 25 members of Bertholf's prospective crew. The majority of the crew arrived in the Pascagoula area last month and is completing familiarization training before taking delivery of the ship later this spring."I have served over 22 years on Coast Guard ships and this is the most pleasant, easy ride, technically advanced, and modern ship I have ever been on," said BMCS Bob Montague, Bertholf command senior chief. "I can't wait to sail her under Coast Guard command."