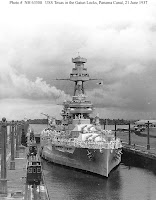 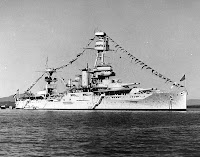 United States Navy ship USS Texas BB-35 was a New York-class battleship. The ship was launched on 18 May 1912 and commissioned on 12 March 1914.Texas served in both WWI and WWII,It is now a battleship memorial museum located at the San Jacinto State Historic Site in La Porte, Texas near Houston.She is the only first-generation dreadnaught (WWI era) battleship to survive to this day.