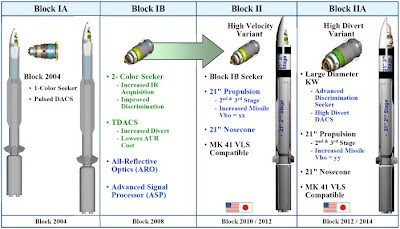 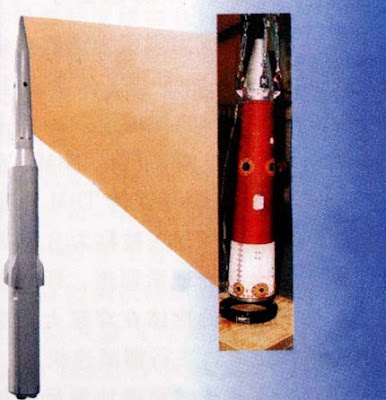 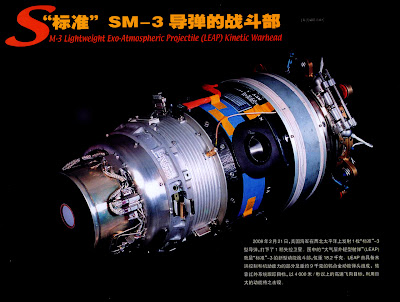 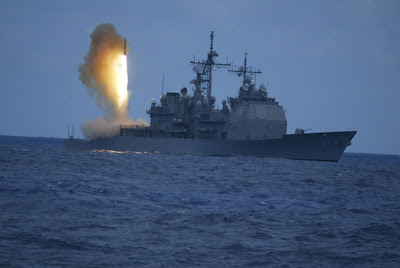 Raytheon Standard SM3 RIM-161 Missile
The SM-3 (Standard Missile 3) is a derivative of the RIM-156 Standard SM-2ER Block IV missile, and is the missile component of the U.S. Navy's forthcoming theater-wide ballistic missile defense system, called NTW-TBMD (Navy Theater Wide - Theater Ballistic Missile Defense). It is an upper-tier ballistic missile defense weapon, originally planned to complement the lower-tier SM-2ER Block IV A, but the latter has been cancelled in December 2001.

The LEAP uses a FLIR (Forward-Looking Infrared) sensor to locate its target, and was tested in a 4-flight series called Terrier/LEAP from 1992 to 1995. These tests used modified Terrier and Standard SM-2 missiles. Two intercepts were attempted during these tests, but the LEAP failed to hit the target in both cases. The first flight-test of an RIM-161A SM-3 missile occurred in September 1999, and the third test (in January 2001) demonstrated successful missile flight and control up to fourth stage (i.e. kinetic warhead) separation. In January 2002, the first all-up test of an RIM-161A succeeded in hitting an Aries ballistic target missile.


Not all the early flight tests have been successful. The kill vehicle's SDACS (Solid Divert and Attitude Control System) malfunctioned on flight "FM-5" on 18 June 2003, which tested the SDACS for the first time in a realistic scenario. Flight "FM-6" in December 2003 successfully intercepted its target, but the SM-3 program has nevertheless been significantly delayed. Test "FM-7" has been postponed several times, but has eventually been conducted successfully on 24 February 2005. This test used an RIM-161A missile in the current standard operational configuration.

As of mid-2006, SM-3 tests are flown at regular intervals. The successful interception test on 22 June 2006 used the latest Block IA configuration of the missile, designated RIM-161B. The RIM-161B features upgrades to the rocket motor and the guidance & control software for increased overall performance. It also includes producibility and maintainability design changes.

Planned future developments of the RIM-161 missile include the RIM-161C Block IB with a two-color seeker and a new DACS, and the Block II series which will feature, among other improvements, 2nd and 3rd stage rocket motors with increased diameter for improved missile kinematics.