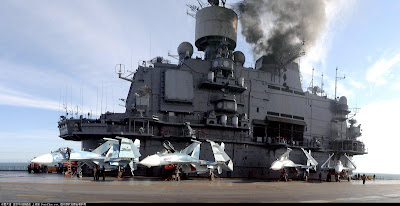 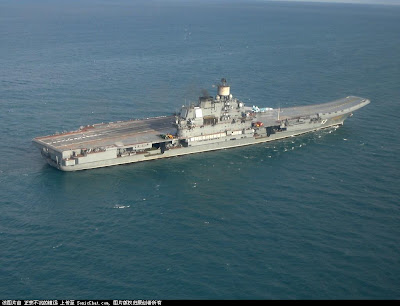 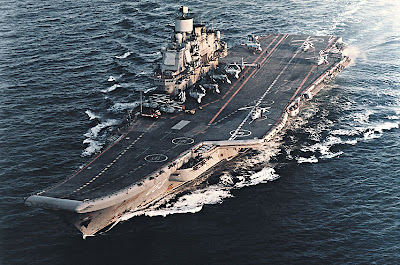 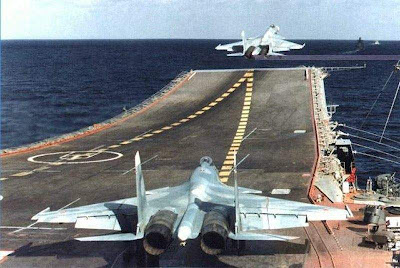 The Admiral Kuznetsov's main fixed-wing aircraft is the multirole Su-33. It can perform air superiority, fleet defense, and air support missions and can also be used for reconnaissance and the searching for naval mines. It is augmented by the twin seat Su-33UB, which is also used for pilot training along with the Su-25UTG. The carrier also carries the Kamov Ka-27 helicopter for anti-submarine warfare and small transport.
For take-off of the fixed wing aircraft, the Admiral Kuznetsov utilizes a ski-jump at the end of its deck. On take-off aircraft accelerate toward and up the ski-jump using their afterburners. This results in the aircraft leaving the deck at a higher angle and elevation than on an aircraft carrier with a flat deck and catapults. The ski-jump take-off is less demanding on the pilot, since the acceleration is lower, but on the other hand results in a clearance speed of only 120-140 km/h requiring an aircraft design which will not stall at those speeds.
The cruiser role is facilitated by the Kuznetsov's complement of 12 long-range surface-to-surface anti-ship Granit (SS-N-19) cruise missiles. This armament justifies the ship's type designator "heavy aircraft carrying cruiser".